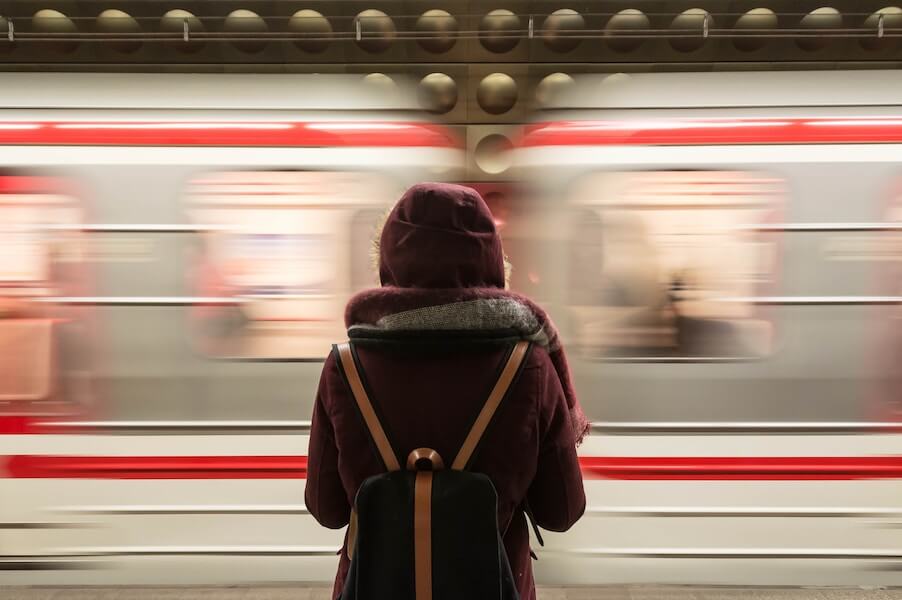 Prague is cold. I stand on the train platform shivering in my wool coat, tighten my scarf around my neck, and close my eyes. I picture myself sitting on the front steps of my university library back in Texas, the feeling of the Texas sun in the summer, its angry heat. Despite living in Europe for four months, most of it spent in Northern England, I’m not used to the cold. I check the time on my phone, making sure I’m still on schedule for making my flight. I’m leaving Prague today for Sweden, which won’t be any warmer—in fact, snow is predicted for the next few days in Stockholm. I shudder, feeling Sweden’s chill preemptively.
The subway train’s low whistle startles me, and I take a step toward the track, adjusting my backpack over my shoulder. Beside me, a large-ish man with a dirty beard steps forward too, as do the rest of the people waiting on the platform with us. The man looks rough, dressed in layers of brown threadbare coats, bulking him up to look beefier than his hollow cheeks reveal him to be. I guess him to be homeless, something I’ve gotten used to seeing in Europe the last few months. The train approaches; the crowd moves in a controlled surge towards the track, anticipating the relative warmth of the subway coach.
What happens next is over before anyone can react. The man beside me steps from the yellow edge of the track directly in front of the train, which slams into him so quickly I almost miss it. I reflexively slap my hands over my face, covering my eyes as his body flies forward into the darkness of the tunnel. The train screeches to a halt, and the conductor swings his door open and jumps out of the car. Waves of horrified screams wash over me, and a rush of people run towards the end of the platform, where I can only assume his lumpy, brown-coated body lies in a wash of blood. As if they could do anything about it. As if there were anything left to save.
I slowly lower my hands from my face. Through the train’s windows, I see passengers looking around at each other in confusion. It occurs to me that despite our proximity, despite being only a few feet from where I stand, these people can’t know what has happened. To them, the man’s death was a thump, a sudden stop at the platform. Nothing more. A little girl with brown skin and tight curls watches me through the glass, somber. When she presses her hand to the window, I wave back at her without thinking.
I don’t move from my spot on the platform until I am jostled by the passengers disembarking the train, which has just now opened its doors. I struggle against the crowd toward the train, until a man stops me in loud Czech and I understand from his arm movements that the track has been shut down. Around us, police officers gather and begin speaking into their walkie-talkies, gesturing for the crowd to move up the stairs. I stumble up to above ground, where the wind hits my face with a cold I barely feel. I numbly wave down a taxi in front of the station while counting out Korunas to pay the driver, then settle into the backseat and mumble out letiste, airport, when the driver asks for my destination.

My father has the tendency to block out traumatic memories almost instantly, his brain’s protection strategy from psychic damage. Along with our blue eyes and curls, my brother and I inherited this trait. Pieces of our childhoods are black forever, fights and injuries locked away in a barb-edged safe. I can feel the empty space of this lost time if I try to, like poking my fingers through holes in a net. Whatever keeps these memories captive is flimsy. It is easily punctured by the right trigger, and so the memories lie in wait for the right moment to slip back into my consciousness.
So, it’s no surprise when, between the time my taxi arrives at the Prague airport and I arrive at my hostel in Stockholm, I manage to believe that nothing happened. It’s as if the man next to me on the platform got on the train when it arrived, his only notable feature the strong scent of cigarettes wafting off his coats. As if the train reached the airport with plenty of time to spare, not a hitch along the way. The memory of the morning at the train station goes the way of childhood and adolescent visions even now I can only grasp the edge of. Tucked away into the black.
It’s not until I’m on the bed in my hostel in Stockholm that the day rushes back into me in one solid wave. I flip over onto my stomach and I can see his face, a dirty beard over protruding cheekbones, thick eyebrows over black eyes. My scream is muffled by the pillow when it finally escapes.

Stockholm is cold, even colder than Prague. Later, I wander down the streets in the snow, which has made the sky dark despite the early hour. Snowflakes fall on my face and I wonder, if this memory of a dead man was released after only twenty-four hours, what inside the recesses of my memory is brutal enough to be hidden for a lifetime? I close my eyes, brush the thought away. Stopping suddenly, I turn on a whim to the restaurant on my left and step through its doorway, into the glow of its fluorescent lighting. I shiver, adjusting to the artificial heat, and survey the uninterrupted diners quietly speaking between bites of food. A rush of cold air has followed me through the door, but no one in the restaurant looks up as the door closes, sealing us away from the dark and cold outside.

Leta Cunningham is currently a MFA student at Pacific University. She also works as the social media specialist for American Microreviews and Interviews, and a nonfiction reader for Hippocampus Magazine. She has published in The North Texas Review, Ten Spurs Magazine, and on LiteraryMama.com.