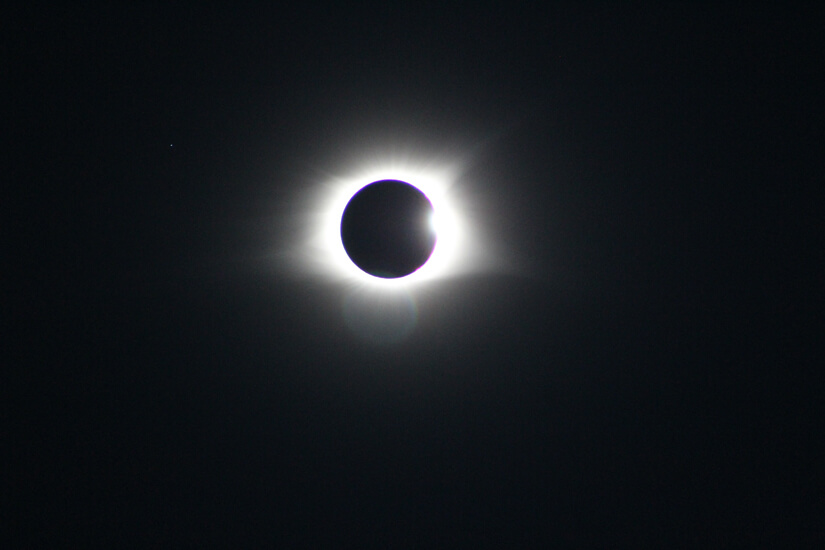 Today, at key locations in a diagonal swath

across the United States

the disappearance and reappearance

of the sun. Their collective throats

bellowed at the absorption of the light

and then erupted en masse at the victory

over the black disk that hid it from us.

Everyone wanted to be covered

by the path of totality today

even though the resonance of that word

in a time of tyrants, dictators, and the threat

of nuclear war is not lost on anyone.

Everyone wanted to be disoriented,

flung into a day-time darkness,

chilled in the middle

of a hot summer day,

reminded of our ant-like existence

Everyone wanted to see nature up-ended,

to feel the relief that a cosmic

hide and seek game could give.

We pat ourselves on the back at knowing more

than our ancestors; we know the sun is coming

back and yet we still cheer in amazement

at its return because we know too well that anything

can happen. We have set things in motion

and know that dominoes will fall.

At a time when we should be celebrating

our assurance that the sun will return,

And as eons pass, our descendants, if we have any,

will look back at our broadcasts and streaming

and twitters and posts and smile wistfully

at our childish excitement. As soon as it was over

we started counting down the days to the next one

so we could see it all over again.

But the time of eclipses is winding down.

Our descendants will yearn for the return

of the days in which a slow-motion

cover the never-blinking face of a flaming goddess,

which daily dares us to look her in the eye.

[The most probable fate of the planet is absorption by the Sun in about 7.5 billion years...” – Wikipedia]

One small mistake in timing,

and now a bird is just a small clump

in the street. I was hoping it was a leaf.

Such a small mistake, costing more than

everything. She should have made it.

All she needed was a quick climb

over the oncoming car.

Stupid stupid such a stupid bird—

But as I start lethargically jogging

my way back home, I humbly realize

my sunglasses are no match

for the hallelujah light

that makes me stumble

and fall to my knees.

I realized it had not been her fault

but the sun’s — that sun

that sneaks closer every day,

melting us so slowly

we feel only slightly softer, nothing

to be alarmed about. But on this day,

the sun sent a quicksilver messenger

from its flaming core

blinding the bird with a shard of light,

dooming her to one final flight.

As I shield my eyes and stumble

down the street, I vow not to be placated

or sultry tanned and cancerous bodies.

I curse the dragon star,

knowing that it burns to absorb us all.

Sunrise at the Mall

reach for the sky’s persimmon skin,

bruised with blue and purple clouds.

An ambulance takes a shortcut through

while a seagull rises in the frigid air

through a trap door, but he’s not flying

anywhere in particular, just showing off.

Toni La Ree Bennett graduated from the University of Washington in Seattle. Her verbal and visual work has appeared in Gold Man Review, Gravel, Poemmemoirstory, Puerto del Sol, Hawaii Pacific Review, Journal of Poetry Therapy, and Viet Nam Generation, among other publications. She is also a photographer and lives in Seattle with a flock of feisty finches. Photography can be seen at tonibennett.com.