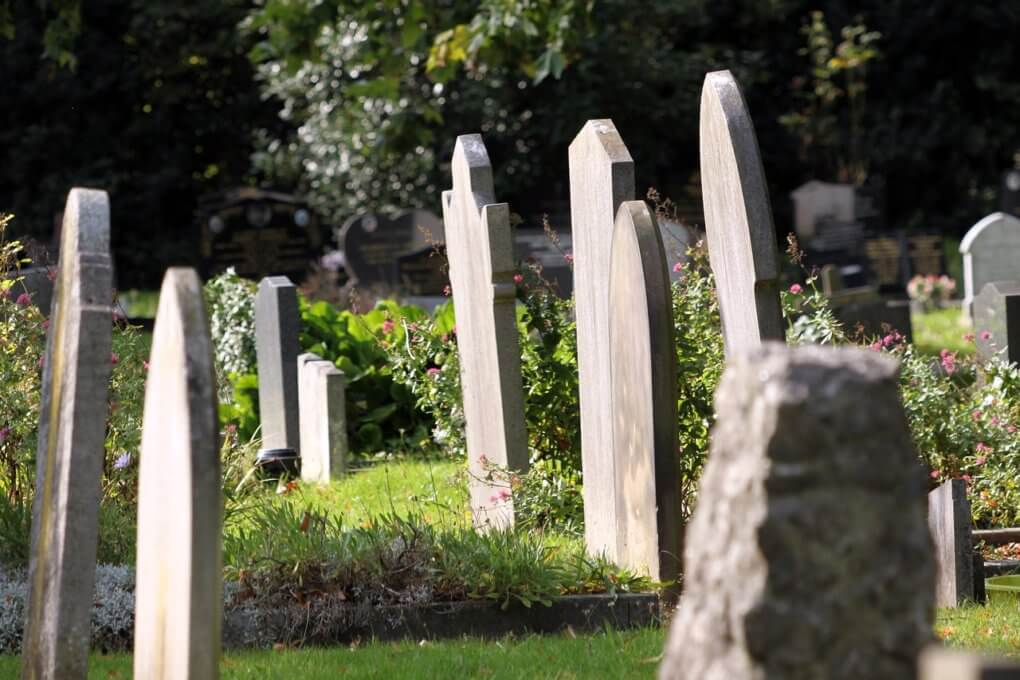 Surrounded by the geometric pattern of uniform white stones stands a herd of deer. Early morning- or maybe late evening- mist as soft and foggy as lingering memories swirls around their narrow, fragile legs. They live and die and breathe here, at home, hooves churning the dirt above forgotten men and women.
They are not the only ones to live in Jefferson Barracks cemetery. Foxes hunt mice and squirrels between dizzying lines of nameless white headstones. Birds nest in trees and perch on the head of an angel or the tall, twisting wrought iron gates. And of course, occasionally, a human can be found. Maybe they are there to respect the seclusion, this strange refuge in the midst of sprawling urban expansion. Maybe they are there to acknowledge the way that rolling hills of white marked graves have left a gap in the frame of the lives before them.
(Imagine, for a moment, a woman who kissed her son’s young cheek when he left home. Imagine her dying, twenty years later, never knowing he was buried within a hundred miles of the now empty, aching home. Maybe his name was Luke or Thomas or something else good and biblical. Maybe he was the kindest boy to ever live, who would stop in the middle of the sidewalk to tenderly pick up a slow-moving caterpillar and deposit it, unhurt, a safe distance from harm’s way. The graves can neither confirm nor deny, blank faces in unending rows.)
Or maybe, that human is a girl gripping the steering wheel for the first time, tears biting at the edge of her eyes as she hurtles five miles per hour through the winding paths repeating her mantra “I can’t hit the graves of unmarked soldiers!” to her exasperated mother, breaking the sleepy silence of the cemetery.

Near the edge of rural Illinois, some hour or so from civilization, a small collection of family members have gathered on the sun ripened grass. Of the six who have hobbled across the uneven, slightly muddy earth, only one is young, a third generation standing among grey hair and bent backs. They have gathered to pay their respects.
She stands to the back of a naturally formed semi-circle. Her grandmother whispers in her ear, the story of the woman who lay beneath them. What would she have been to that girl? A great-grandmother? Step-great-grandmother? At what point would a title even matter? The girl has stopped listening by now, glancing about the empty space as the grandmother mumbles on.
She had been driving a van full of the elderly. The girl’s eyes land on the unkempt hydrangea bushes, full blooms bobbing in the wind. They do not mow everything out here. There was confusion. Just two graves over was another family member, but she had died younger. She turned the wrong way down an exit ramp. Leatha. Semi. The girl will look the name up on her phone in the car ride later, just to see how it was pronounced. She will whisper it to herself, Lay-tha, as she lays her head on the edge of the car, the summer sun lulling her to sleep.
But before that, when the rest head back to the van, she stops, and in the still moment, takes a breath.
A toad crawls through the damp grass, and watches indignantly as the family leaves.

It starts as a small trickle, becomes a stream, a river. They cannot be stopped, that group of girls, who, when given their freedom throw on coats and gloves, to face the cold distant outside, grey sky and leafless trees.
They split off, form groups, natural as the winter brown grass beneath their feet.
The girl walks with friends, gathered together in a clump to protect against cold as much as the exhaustion inside them, brought out by days of tears and contemplation in the retreat center they have escaped from. Their faces burn defiantly against the cold, emblazoned by blood and youth. Long hair whips against pink cheeks and parted lips, catching in their mouth, choking them mid-laugh.
The small group follows the others down the worn dirt path, kicking walnuts away with each step, at once bickering and then in the next moment joking, teasing, talking to each other lightly with voices pitched low with familiarity.
Eventually, they reach the destination, what had been proclaimed to them as one of the oldest graveyards in Missouri: an unimpressive parting of trees closed in by wrought iron fencing. The girls busy themselves with exploring death, hunting for the oldest grave, occasionally pointing out the small stone rocks that marked children taken, two or three at a time, by a blow of smallpox or polio.
Some graves are too worn and weathered to ever be legible again. The further back they go into the small clearing the more they find. Deaths date back declaring 1850 or earlier. They can only push so far into the past before they hit a fence.
And when the girl stares out past the metal barrier, into the clumps of overgrown brush and fallen leaves the sad, isolated graves of slaves, buried in the unkempt wilderness, huddle together as if hiding from her line of sight.
The girl will turn away then, continue her steady study of the so-called oldest graveyard in Missouri and, instead, beyond names and dates and worn stone crosses, she will find herself transfixed by a piece of trash, a spot of crumpled red forgotten there. Who had left it? And did they know that it would be found during a spontaneous escapade?
Her friends grow bored, they’ve seen enough. Let's go. She follows back to the retreat center on the hill where talks of God and death await.
Snow falls, singular flakes, dusting themselves along tired, slumped shoulders and ducked, whispering heads.

I have never understood the term the dead do not speak. Perhaps the person that coined that had never stood between the grave of mother and child, never read inscription on stones, felt the rough touch beneath their fingers, grimaced at the grandeur of a mausoleum. They did not bother to listen. Graves scream and laugh and cry out like the living. There is nothing like the silence of a thousand talking graves.
And someday, when I’ve grown from a girl into a woman, I will get on an airplane and fly twenty hours through tasteless food and snoring passengers taking up my space and free movies that I don’t really care about to get to Australia so that I can go to a graveyard. I have never seen an Australian graveyard, but I imagine it to be much the same, maybe a bit more yellowed or a bit more new. Would I see kangaroos lounging in place of deer? What do they plant to grow, unkempt, beside a gravestone there?
Once in this foreign place I will walk between the rows, hands skimming the worn stone tops as I search, search, desperately search. I know where to go, I’ve waited the long years for this moment, clutching desperately to memories and an online obituary.
And I will find them, if they’re there. You don’t fly across the world to give up in an hour, after all. And what will that grave say to me, when I sit down for the first time beside a friend I had known for years? Hello. I’m here. I’m real. Yes, I’m gone. I love you.
And I will surely cry. For a person taken not by a bullet, not a semi truck, not smallpox or polio or some other vicious disease. For a person taken, in the brazen height of youth, in their sleep.
Or maybe I will not find any marker in that clearing, only the fragment of a dream shared.

I am a young writer and senior studying English and History at Ohio State University. My primary interest is work that addresses mental illness and women's interest. I live with best dog ever, Luna.