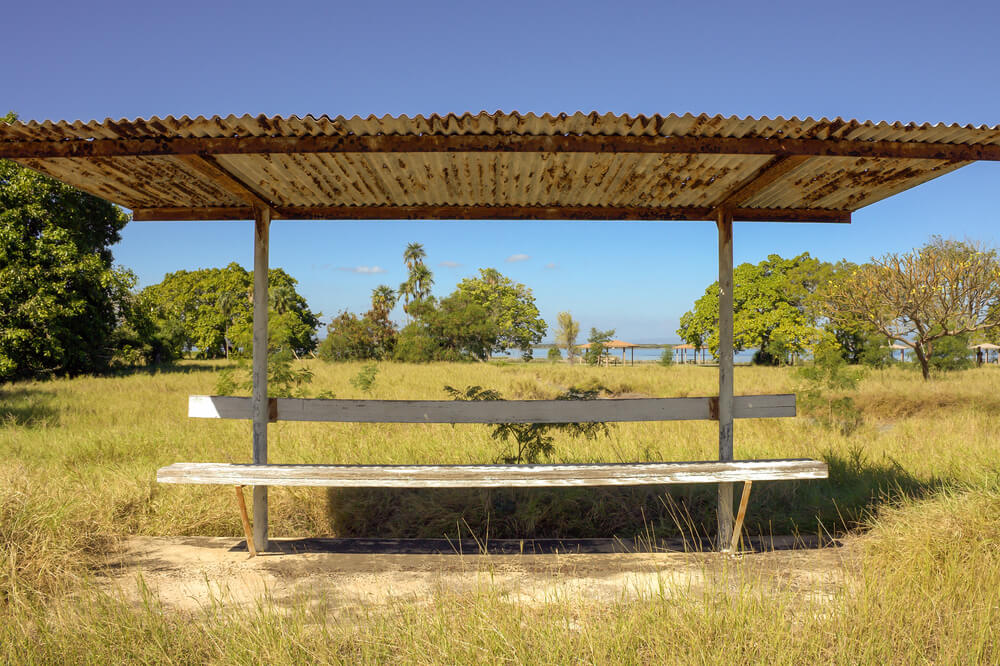 A torrential rainstorm menaces Andrew’s Air Force Base as passengers gather at the compound’s airport to depart for Guantanamo Bay. Frigid rain lashes the tarmac and the aircraft’s wings quiver in the stiff wind. Travelers mill about in the terminal, sipping coffee and glancing skeptically out at the airliner that supposedly can withstand the tempest and deliver them to Cuba.

I’m hunched in one of the terminal’s corners, eager to start a week as an official NGO observer of the military commission for the 9/11 conspirators—including Khalid Sheikh Mohammed. But for now I’m poring over the novel I’ve brought along. The Association of Small Bombs opens with a riveting account of a terrorist attack in India. The book then examines how the assailants, as well as the attacks’ survivors and their families, cope in the bomb’s aftermath. The most heartbreaking passages chronicle the interminable suffering of Deepa and Vikas, whose son died in the blast.

Intermittent weather updates over the intercom tear me away from the novel’s opening pages. The air traffic controllers wait for conditions to improve. The storm only worsens as the hours drag on. Eventually, the crew presses ahead with boarding. Military generals have places to be, weather be-damned. With everyone on board, passengers and crew brace for a shaky takeoff. Gusts of wind jostle the aircraft as the plane accelerates upward into the storm.

Withering turbulence unnerves even the most seasoned travelers for the flight’s first leg. But around the half-hour mark, the plane bursts out of the clouds into sunny, smooth skies.

On its final approach to landing, the plane veers at an odd angle, with the left wing tilting up about thirty degrees. The aircraft swerves at the last moment, barely avoiding clipping the right wing on the tarmac. It is a wobbly landing, but a landing nonetheless. The pilot comes on over the intercom. “Welcome to sunny Guantanamo Bay!” he says, as if we’re all there to dole out some justice and catch some rays.

Most people would be surprised to learn that the crucible of justice for the perpetrators of the 9/11 terrorist attacks sits on a dilapidated tarmac. The courthouse where the detainees are tried—a low-slung, beige box of a facility—lies on the cracked pavement of Guantanamo Bay’s out-of-service airstrip. Rings of barbed wire fencing, coated in black mesh to stymie snipers, ripple outward from around the dingy building. At first glance, the complex looks like the world’s most fiercely guarded toolshed.

The military commissions for the 9/11 conspirators have languished in the pre-trial phase for over ten years. The slow military trials’ legacy reflects the physical spaces in which they are held. Communities create and sustain spaces, real and imagined, to foster respect for and adherence to the law. Magnificent décor marks courtrooms and state capitals across the country, while prisons are domineering and bleak. The courtrooms in The Association of Small Bombs are dingy, musty, and spare. The spaces do not convey the pursuit of justice or truth to those that inhabit them. Rather, the events that unfold in the novel’s courts highlight the vast chasm between citizens and the state’s sprawling, corrupt bureaucracy. Spaces devoted to administering justice, like government budgets, are inherently moral constructs. Both reflect the values and priorities of the communities that craft them.

The ramshackle facade of the Guantanamo courthouse masks the fact that it is outfitted with some of the world’s most sophisticated technology. Most buildings relating to Guantanamo’s detention facilities embody this dichotomy—they are all incredibly secure and easy to dismantle. The military, if it chose, could pack up and leave. But it won’t. The buildings seem to be erected in this peculiar fashion out of a devotion to the fiction that anyone is going anywhere anytime soon. Make no mistake—the physical structures may be easy to disassemble, but everything about Guantanamo bay’s detention program—the detainees, the soldiers, the military commissions—are entrenched.

Just after 8 AM, our army chaperons lead the other NGO observers and me about two hundred yards from our dusty encampment to the court’s security checkpoint. The short line snakes through a tent where congenial, diligent soldiers scrutinize our belongings under x-ray machines and chat with us as we shuffle through metal detectors. Once cleared, we file in through the building’s back door. Icy air blasts each person as they enter, a chilly overcorrection meant to compensate for the morning’s sweltering heat.

The room in which we are seated to view the trial holds about thirty-two, with four rows of eight seats. Windows along one wall of the rectangular space offer views right into the courtroom. Panels of (doubtlessly reinforced) glass separate the observers from the detainees. While the observers have an unobstructed live look at what unfolds in the courtroom itself, the audio is on a forty-second delay. A technology officer remains poised throughout the hearing to cut off the sound if anything classified is uttered. Three television monitors mounted on the ceilings above the windows are synched to match the delayed audio. But if you look through the window instead of at the televisions, the effect can be disorienting.

The victims families sit stoically in the seating section closest to the door. A navy curtain, cinched against the wall, stands ready to be unfurled at a moment’s notice to shroud the families should the need arise. Reporters mill about by the glass, murmuring and scribbling feverishly.

Two soldiers lead each detainee into the courtroom one at a time, clenching the feeble arms of the prisoners should they try to wriggle free. The soldiers deposit each detainee at his designated table in the courtroom. Translators and lawyers flank each prisoner as the soldiers sit against the wall, staring implacably at the men they just ushered in.

Defense lawyers and paralegals buzz about, seizing binders bursting with papers from dollies that line the wall between the courtroom and where the audience sits.

The US soldiers guarding the detainees wear standard military dress—just like the detainees, in a way. Each detainee dons his own idyllic conception of what a warrior should wear, which for each entails flowing garments in white and beige camouflage. Clear plastic crates lie by each defendant. The containers hold the detainees’ prayer rugs, Korans, and shawls.

Women on the defense teams wear varying levels of religious garb in order, they maintain, to better relate to their clients. Female attorneys for the prosecution stand without any headscarves or coverings just a few feet away. Everyone exudes confidence on the prosecution’s side. The defense teams give off more palpable tension. The defendants recline in the seats to which they are chained, slyly grinning and playfully chatting amongst themselves. All but the detainees rise abruptly as the judge enters the room and strides to his perch at the head of the courtroom.

The day’s main issue is whether any substantive matters can be addressed at all. The detainees are being tried for crimes that, upon conviction, potentially carry death sentences. A defendant has a heightened right to an attorney when he or she is charged with a capital offense. Each defendant charged with a capital offense is entitled to a learned counsel—that is, a lawyer with expertise in handling death penalty cases.

Lawyers on both sides press their case, casting a seemingly stultifying procedural quibble into a broader, more urgent context. To a casual observer it seems that the issue is pivotal for both sides. It is immediately apparent that these lawyers don’t pick their battles sparingly. Every point of contention merits zealous advocacy. That approach would be overkill in the context of nearly any other trial.

But all the lingering trauma of 9/11, along with all the hope for justice and retribution, is packed into that trailer courthouse whenever proceedings are underway. No one expects justice to be meted out on any given day of proceedings—not yet, anyway. But 9/11’s legacy charges every procedural squabble with meaning beyond the specific issue at hand.

The judge rules that defendant may not waive his right to learned counsel. With that, the hearings end for the week with a vindication of defendants’ rights—or yet another delay in justice for victims’ families, depending on what side of the courtroom you are sitting on.

Finality is a crucial aspect of law and justice. It telegraphs endpoints for potential liability and punishment, and provides victims and communities with closure. In this way, narrative and law are intertwined. America erected the military commissions in part to tell itself a story, to develop an account of 9/11’s unimaginable tragedy that had a beginning, middle, and end. Narrative can derive structure and coherence from disarray. But as the military commissions drag on, the tale gradually loses its potency as a healing mechanism.

An acute perception of the senselessness of it all inevitably fills the void left without a coherent narrative for a tragedy. Anomie and aimlessness radiate throughout The Association of Small Bombs. Pointlessness paralyzes the survivors and victims’ families.

Deepa, the mother of one of the bomb’s fatalities, latched onto a clear narrative of justice that injected her with revitalizing purpose in the tragedy’s immediate aftermath. Then she went to court. The alleged assailants were obviously innocent—at least of the terror attack that killed her son. In that moment, on some level, Deepa realized that justice would likely never be served. Her narrative crumbled. Futility and despair filled the void. “‘[The defendants’] personalities did not add up to a bomb,’ thought Deepa. ‘She was aware, suddenly, that the death of her children was not a metaphysical event, but a crime. A firecracker set off by uncaring men in a market.’”

Disaster, in the absence of narrative, breeds the sort of aimlessness and misery that swallowed Deepa whole. Yet catastrophe without a coherent story still reveals something important about horrific events and those who perpetrate them. Alexandra Schwartz, reviewing The Association of Small Bombs in the New Yorker, writes, “Historical and sociological and political explanations, necessary as they are to making sense of terror, don’t capture the tiny, intimate urgencies that power the life of a person caught in their web.”

Military commissions will never explain the series of tiny events—the association of small bombs—that animated the terrorists to devastate America. By fully understanding how narrative devices—like trials and commissions—work to combat strife in a tragedy’s wake, we can fully grasp the mechanisms’ potential and limitations.

The commissions offer an opportunity to reaffirm the country’s values and to offer closure. Asking the process to do any more than that undermines its purpose, frustrating the system, its physical spaces, and those who operate within them. The war on terror threatens to stretch into a vast, hazy expanse, with no clearly defined enemy or end date. We cannot let the quest for justice for that war’s victims wither as the war rages on.

David Will is a graduate of Princeton University and The University of Virginia School of Law. His work has been published in the Washington Examiner and the Hill.